Inside the adidas Platform A accelerator programme 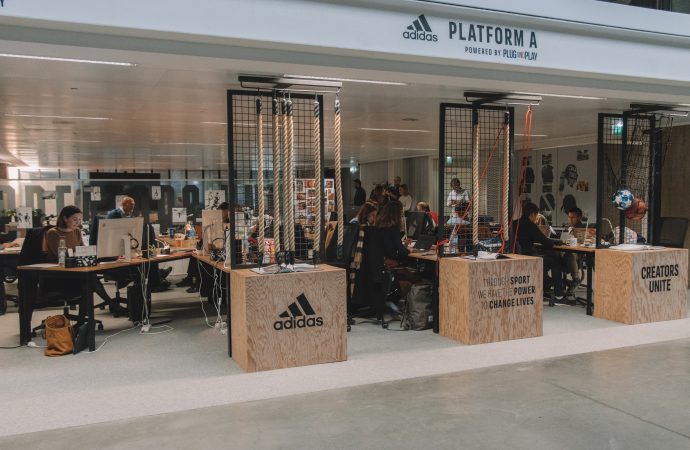 Anyone who has been following sustainable innovation in the sport sector over the past year will be aware of the strides adidas has made, particularly in relation to reducing plastic waste through circular economy principles.

Over the course of 2019, the sportswear giant produced 11 million pairs of sneakers using recycled ocean plastic as part of its blossoming relationship with Parley for the Oceans. And in 2021, adidas will build on that by releasing its first 100% recyclable performance running shoe, the hotly-anticipated Futurecraft.Loop.

Projects like this are par for the course since the launch of the company’s ‘Creating the New’ strategic plan, which focuses on boosting “brand desirability” as the method for growing the bottom line. There are three strategic choices that underpin the plan – speed, cities and open source – and these are illustrated perfectly by adidas’ recent move into the startup ecosystem.

‘Platform A’ was established last year as adidas’ digital sport accelerator programme in which it seeks out the best digital innovation in sport.

Found at the heart of Paris’ Station F start-up hub – the biggest of its type in the world, with more than 1,000 startups and 3,000 employees – Platform A has spent the past 12 months or so nurturing 22 fledgling companies (full list here).

There are two tracks for the startups: the campus track for startups in the early stages of development, and the focus track for more mature companies that can be plugged into adidas’ ecosystem to see if their concept works and how it can be improved.

And in line with the company’s broader ‘Creating the New’ ethos, each startup joining the programme must be able to demonstrate at least one of three key criteria, including a focus on digital commerce, female empowerment, and a commitment to sustainability, with a particular focus on end of product lifecycle, circular economy and plastic pollution.

Emilie Petit, the director of Platform A, says that a major strategic priority of the accelerator – and adidas in general – is to use sport to “fight against social inequality”.

Indeed, two-thirds (65%) of the companies chosen to take part in the programme have female founders despite the fact that only 22% of all startups have at least one female founder. Many of the startups with an environmental sustainability slant also take social justice into account.

Take Stuffstr, for example, which was one of the first companies to join the programme. The platform’s premise is simple: buy back products from users who have no use for them and sell them onto a second owner who may not be able to afford the original product.

“We have a very simple vision statement,” John Atcheson, the company’s co-founder and chief executive, says during a press event in Station F. “No unused stuff. We focus on keeping things in motion all the time. Every product is used fully – once the first owner is finished with it we pass it on to a second owner and, ultimately, we take that product and repurpose, recycle or use it for materials.”

He adds: “The problem is generational. We buy lots of stuff, we use it for a while and it sits around and we don’t know what to do with it. Only 2% of items are ever resold – 98% has no residual value for the owner. About 70% of the stuff we own ends up directly in landfill, even if it’s perfectly usable stuff. That represents $400bn in wasted value every year.”

Keen to get a chunk of this $400bn, adidas has piloted Stuffstr’s “embedded commerce” platform, called Infinite Play, in London. If an adidas customer wants to sell an item, they can go on the website, choose from their purchase history what products they want to sell and Stuffstr will offer an instant buy-back. The products will be picked up on the same day by a courier and, once picked up, the store credit will be forwarded to the customer.

The financial benefit for adidas, says Atcheson, is the revenue generated on the resale market for a product that had already been sold. But the benefits go beyond that, he explains.

“It’s great for customer loyalty and can help draw people in by becoming participants of this programme,” he says. “We also collect data for everything that goes on in our system. We’re able to start feeding back information about how long people are holding on to items, what condition they come back in, what types of problems we are seeing and, of course, all the information about what these items are generating in a secondary market, and what products are really holding value.”

One of the startups that joined the accelerator programme during the second intake of companies, The Fabricant, takes the idea of reducing the negative environmental impact of fashion even further.

In fact, the company is the world’s first digital fashion house that produces absolutely nothing for the physical world. All garments are made for the digital realm and allows consumers to purchase custom pieces via blockchain that they can show off on Instagram or Facebook.

The fashion industry is responsible for around 10% of all global carbon emissions, while textile production uses 93 billion cubic metres of water annually.

“Taking the fashion industry towards a digital existence is fundamental for the planet,” warns Amber Slooten, co-founder and creative director of The Fabricant.

She adds that the $2.5bn market for in-game purchases for platforms like Fortnite shows that the market for this type of fashion is “already there”. Her hypothesis is backed up by the fact that one of the company’s ‘digital couture’ dresses sold for $9,500 in New York last May.

“A new paradigm is happening and we have to radically think about the way we dress ourselves to make fashion exciting again,” Slooton says.

Plastic pollution, and the reduction of it, forms a major part of adidas’ overall sustainability objectives. So its backing of Yoyo, a company that facilitates the mass collection of plastic bottles in cities, makes a lot of sense.

Like Stuffstr, the concept is simple. People, particularly schoolchildren and sports club members, are incentivised to collect and sort plastic waste in their communities, and trade that waste for prizes like tickets to sports matches.

Sorters (people who collect the waste) and trainers (those who teach them to sort correctly) can take part in six cities across France, including Paris, Marseille, Bordeaux, Lyon, Reims and Mulhouse. According to director Stanislas Jallot, the overarching objective is to improve France’s current plastic recycling rate of 55%.

“We’ve realised that dense, urban areas are the areas that recycle the least,” Jallot explains. “We want to create awareness in clubs and with kids and bring collective rewards for these people.”

To date, Yoyo has collected and recycled more than five million plastic bottles since it was established in early 2017. It has a network of 40,000 sorters and 500 coaches, boasting a recycling rate of 90%. With adidas’ support, the aim is to roll out to more cities.

“Plastic has a value, so we make money from the plastic,” he adds. “But it’s not how we make money. We principally work with the cities to increase their plastic recycling.

“The current system they use will not get them to the 90% rate in a few years – it will take 30 years. How much money does it cost to get to 90% recycling? No one knows. Paying Yoyo gets them the performance. There’s a fixed cost to get up and running plus a cost per tonne of plastic.”

From next month, adidas will begin to seek out its third tranche of startups, with the ambition of onboarding them by Q3.

“Our goal is to connect the corporation with the startups to work on higher use cases,” Petit tells The Sustainability Report. “We have a lot of experts working in sustainability, digital and tech co-creating with startups. We have a strong ecosystem and many experts in the Platform A community.”

The Sustainability Report visited adidas’ Platform A in the context of our partnership with Global Sports Week Paris, the new annual gathering of the world sports economy, which will take place at the Carrousel du Louvre from Feb 5th -7th