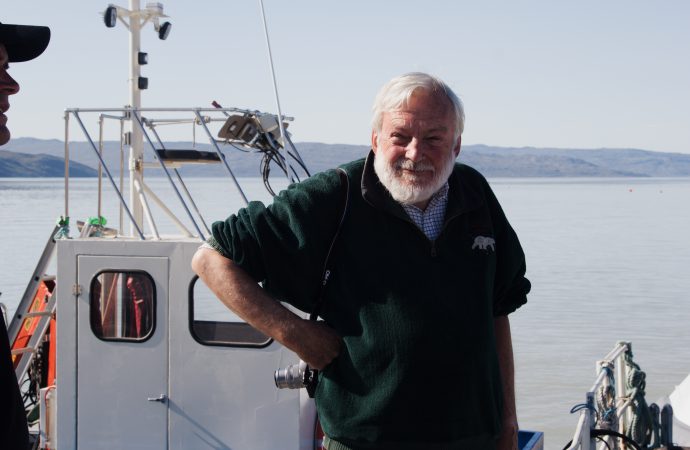 Much has been said over the past few weeks about the way the human race has reacted to the unfolding coronavirus situation and how it contrasts with our collective response to the climate crisis. Professor Peter Wadhams, the esteemed Arctic scientist, is quick to highlight the parallels between the two threats.

The “frightening acceleration” of the situation and exponential rise in the number of cases is akin to the speed in which global warming is destroying some of the most precious parts of the world, he says. And while the world sits up and takes notice at the close to one million cases of coronavirus and 40,000 deaths (at time of writing), the fact that 150,000 deaths annually are attributed to climate change struggles to get column inches.

In truth, Wadhams is underwhelmed by the political response to both crises and cites “complacency” as the key factor in the escalation of climate change and the seemingly unstoppable spread of COVID-19.

“When something is infecting something else, things rise exponentially, so they shoot up at an accelerating rate. And just as the virus is exponential climate change is rising exponentially because every effect is building on the previous effect,” he explains. “For instance, the sea level rise is accelerating because the loss of ice from the Greenland ice sheet is accelerating.

“The message about climate from the polar regions is that all the effects are accelerating and, therefore, if you think something is happening slowly and we have plenty of time to deal with it, we haven’t. It will just come upon us and overwhelm us unless we take action now.”

Wadhams states that private enterprise must step forward and find the solutions to the climate crisis to make up for the shortcomings of governments, although in an interview with The Sustainability Report he admits that he never thought that sport (let alone a motorsport) would be among the sectors to do so.

But Extreme E – an off-road electric car racing series developed by Formula E founder Alejandro Agag – is no ordinary motorsport. The premise is simple but ambitious: to race all-electric SUVs (image below) in locations being badly affected by climate change to provide an exciting new challenge for drivers and spectators, highlight the drastic environmental problems facing many parts of our world, and to showcase the electric car as a viable and attractive proposition for consumers.

More than that, the series wants to leave a scientific legacy in each of the locations it touches. That’s where Wadhams comes in.

Each member will advise race organisers on topics including location suitability, logistics, impact, education and research, and positive legacy programmes that will continue long after the circus has left town. With more than 50 years experience in polar oceanography, sea ice research, and research on climate change process in polar regions – plus 55 Arctic expeditions under his belt – Wadhams was deemed the perfect individual to support preparations in Greenland.

“I’ve worked in Greenland lots of times, and when Extreme E said it needed a big flat area to work on that was either on or near the ice sheet I knew the perfect place,” he says. “One of the times I was there I found that the road from the airport was being extended up to the ice sheet and that Volkswagen had set up a testing track. Once it was demolished I took the people from Extreme E up there and we found a nice flat, safe place to work, and we settled on that.”

While Wadhams’ logistical expertise proved invaluable, the research projects he has planned to complement the Greenland leg of the series should add real value to Extreme E as a sporting brand and to the scientific community at large.

The first project he discusses focuses on a disturbing phenomena that reveals the extent to which the Greenland ice sheet is melting: the blackening of the ice.

“I walked over the ice sheet last summer, on 1 August – the day when there was more ice melt than any other day in recorded history at 12.5 billion tonnes,” Wadhams explains. “I was surrounded by waterfalls, fast-flowing rivers – things that never used to be there. And you didn’t need to worry about slipping on the ice because there was a thick layer of mud and dirt.”

This dirt has been accumulated over hundreds of thousands of years and, until now, has remained under the ice sheet. However, with the ice sheet melting faster than ever, the dirt is reaching the surface and decreasing its albedo (which reflects radiation). The result is that the ice absorbs more radiation, which speeds up the melting of the ice sheet creating a vicious circle. According to Wadhams, the ice sheet is now melting six times as fast as it did 20 years ago.

Students from the Polytechnic University of Turin, in which Wadhams teaches a course on climate change, will accompany him to the region to analyse the dirt, to find out if any of the material is living matter, and to explore its chemical structure.

One of the objectives of the research is to engage the local community of Inuit people who live in a “small corridor” of UNESCO-protected land between Kangerlussuaq and the coast.

Extreme E’s ambition is for each location to have a legacy project that is larger in scope than the other programmes, and has an impactful role in addressing particular issues around climate change in the local area.

For the Greenland leg of the series, Wadhams is working on an “iceberg towing” concept that is designed to help alleviate water problems in nations facing a shortage. The concept works like this: a large iceberg is wrapped vertically in fabric, similar to that which preserves ski trails in the Alps, before being towed to a hotter, drier part of the world. As it melts in its new home, the freshwater from the iceberg can be used as drinking water or for irrigation purposes.

The concept was first mooted by French engineer Georges Mougin, who wanted to tow an iceberg from Antarctica to Saudi Arabia. It became evident that this couldn’t be done as moving the iceberg across the equator would melt it too fast. However, Wadhams maintains that the procedure can be done if the object is towed in its own hemisphere.

A proposal to tow an iceberg from Newfoundland to the Canary Islands – where water is extremely scarce – failed to get off the ground because EU funding couldn’t be secured. But Wadhams wants to use the Extreme E legacy project to show what can be done when moving a smaller piece of ice from Kangerlussuaq to Bermuda.

“Bermuda should be accessible enough for us to study the whole process of the melt, towing and what forces you need to exert, and whether you can steer it,” he says. “All the practical problems with towing can be solved with a smaller piece of ice and a shorter tow. That will hopefully inspire the funding agencies to go for the big one, which is really a way of solving water problems in quite large countries.

“It could solve problems in the Canary Island. It would solve the water problems of Namibia where, if you could get an iceberg, you could do a large-scale irrigation scheme around it.”

It would be some legacy if Extreme E could facilitate progress on such a fundamental issue, not just for the competition, but for sport as an accelerator of sustainable development. A trend emerging in sport is forward-thinking organisations leveraging science to improve conditions for their sports, and the world more broadly as a consequence.

The Ocean Race’s ambitious scientific programme, in which competing sailors collect and measure seawater on various legs of their journey to identify the extent of the ocean plastic crisis, is one such example. World Athletics’ initiative to measure air quality against athlete performance is another.

Wadhams explains that he “really admires” Extreme E for trying to bring burning issues like climate change, air quality, scientific research and electric mobility to the masses through sport via the off-road competition and Agag’s initial motor racing product, Formula E, which has gone from strength to strength since its launch in 2014.

It says much about Extreme E’s leadership in this area that the company first met Wadhams through Cambridge Climate Repair – an organisation set up by collaborator Sir David King, the former chief scientific advisor to the British government – which advocates the acceleration of “air capture” technology to remove carbon dioxide from the atmosphere.

According to Wadhams, this is the only way to save the planet from climate change and that carbon reduction isn’t enough. But his endorsement of the electric cars Agag is trying to promote though Formula E and Extreme E is unwavering.

“Electric cars are vital for helping us save the world from too much CO2, and you can get the public keen on them by racing them,” Wadhams adds. “It’s getting the public out of the wrong mentality and into the right mentality and showing them that electric cars can be exciting, thrilling and fun.”