Leading by example in the Challenge Cup bubble 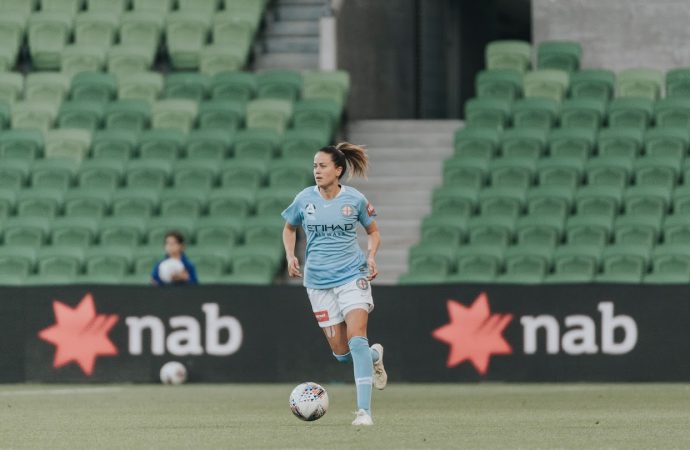 As a professional athlete, you’re always looking for a competitive edge. Every morning, you wake up and ask yourself, how can I be better today than I was yesterday?

You’re always looking to improve, and not just on the field. Every aspect of your life is under constant review for areas where you can do more to maximise your efforts.

Six years ago, my own professional journey led me to become a vegan athlete. I initially made the switch for health reasons and because I thought it could improve my on-field performance. Little did I know that it would fundamentally change the way I see my place in the world and ultimately lead me to take the initiative of working to make the sports industry carbon-neutral, starting with the National Women’s Soccer League (NWSL).

Almost immediately upon going vegan, I felt the personal benefits of my new diet. I felt stronger, both physically and mentally. My recovery time was shorter and my energy levels were higher. Playing soccer year round in the NWSL and W-League wears on both your mind and body. But after I made the switch, I honestly felt like I was getting younger season after season.

Over time, I started to do more research into the diet. And as I did, I was blown away to discover just how much of an impact being vegan had not only on my own health, but on the health of the planet as a whole.

Did you know that you’d save more water by not eating one pound of meat than you would by not taking a shower for 6 months?

Or that 70% of grains and cereals grown in the United States are fed to farmed animals?

And that nearly a third of the Earth’s land mass is used for raising animals?

When I had heard people praise veganism before, it was always in terms of saving the animals. Obviously, I knew that eating chicken wasn’t ideal for the chicken. But what I hadn’t realised was just how inefficient it is to raise animals—and how much damage eating meat does to the earth itself.

Going vegan forced me to think critically about my relationship with the environment, as I became keenly aware of every single thing I was putting in my body. And the more I read, the more my love for the natural world evolved. I realised that being vegan wasn’t just a way to spare the lives of animals and help my athletic career – but that it was also a way to help the Earth, day by day, meal after meal.

One of the most difficult aspects of dealing with climate change is that it’s such a huge problem. It’s hard to see how you can make an impact as a single individual. But what my experience with veganism has proven to me is that changing the world is often as simple as just changing a few of your everyday behaviours.

While collectively we need to think big in order to save our planet, individually, we need to think small. Eco-friendly habits, over time, will do more than any one single decision or donation.

As I’ve grown in my education and awareness, I’ve looked for other ways to change my personal behavior in order to lower my environmental impact.

I started by tracking my own carbon footprint. As a professional athlete, travel is an unavoidable part of my job. But by creating a baseline, I would have something tangible to work against, and I knew it would be a great resource to share with my teammates.

I partnered up with Santiago Gallo, who used to work for the OL Reign as an operations coordinator and manager. Santiago has a background in environmental engineering and sustainable consulting, and even when he was back home in Colombia, he was still willing to help me aggregate and analyse all the data I sent him.

With his help, I was able to rally my teammates and team owners together to figure out ways that the OL Reign could lead the league in sustainable practices, starting with the 2020 Challenge Cup.

Understanding our impact on the environment was and continues to be very important to me. I was already well aware that our team travel had a significant carbon impact but I wanted to delve deeper into the numbers, so I decided to track my own personal carbon footprint during a season. Originally, I planned on mainly tracking travel until the pandemic eliminated travel and had us all competing in a common location.

Inside last summer’s Challenge Cup bubble, safety was our top priority for obvious reasons. But because everyone was so focused on Covid, environmental concerns fell by the wayside.

When we first arrived in Utah, everyone was using plastic water bottles and disposable silverware. This was done for the sake of sanitation, but it also led to a ton of unnecessary waste. These levels of waste led me to expand the scope of my tracking and research. I wanted to see how replacing all the single-use plastics with reusable wares would impact carbon footprint data.

With the help of Dani Weatherholt and Rosie White, I immediately began reaching out to local companies that I thought would be interested in providing my teammates and I with sustainable products in exchange for us marketing their brand.

We were quickly able to secure Crazy Cap water bottles (which use UV light to kill bacteria) for each player on the team. Albatross Take Back Ware likewise provided us with reusable utensils that generated zero waste, and ECOlunchbox sent us stainless steel plates to eat off. Working with small, sustainable companies whose values aligned with our own, we were able to eliminate plastic from our Challenge Cup environment as a team.

As I pushed for our club to be more environmentally friendly, I became concerned about securing everyone’s buy-in. As female footballers, we already have so many other commitments and concerns that extend beyond the soccer field. Most of us don’t have the luxury to just focus on our sport in the way that our male counterparts do. Because of that, it’s easy to understand why environmental concerns can take lower priority.

But inside the bubble, all it took was leading by example. Once Rosie, Dani and I were able to show our teammates how easy it was to just change just a few of their habits, everyone bought in. They realised it was both more environmentally friendly and personally convenient to use reusable items rather than plastic.

My total carbon footprint inside the NWSL bubble last year was about 0.795 tons of CO2e, the relative equivalent of the consumption of 1.8 barrels of petroleum or charging your phone 101 times. Based on the similarly controlled conditions of my teammates in the bubble, I estimate comparable footprints for them as well.

While this was a relatively small sample, our Challenge Cup experience offered an important lesson: the best way to make an impact is to lead by example.

This is why athletes have so much influence in our society. Because they have so many eyes on them, they’re able to create a domino effect using their platform. They lead by example, whether it’s through their hard work on the field or their activism off of it.

This experience tracking my carbon footprint in the NWSL bubble helped me to hatch another idea that will launch at the 2021 Challenge Cup: putting together a travel kit for my teammates made up of sustainably-produced items that we use every day to help eliminate the use of single-use plastics. I chose a travel kit because, similar to a toiletry bag, it will be filled with items needed on a regular basis– items that will all be free of single-use plastic.

These travel kits, called the ‘Make a Difference’ kits (or ‘MAD,’ for short), include everything from a toothbrush to deodorant, shampoo to menstrual cups, protein powder to reusable bags. Everything in the kit is sourced from companies that credibly emphasise sustainable and eco-friendly production. In this year’s Challenge Cup, everyone part of OL Reign will receive a travel kit for their use during, and hopefully beyond, the competition. The goal is to spread these kits, and other initiatives like it, to the rest of the league and sports world as a whole.

As part of the launch of the kits, we’re releasing a digital pledge that encourages athletes and fans to #PlayItForward by doing one small act to eliminate the use of single-use plastics. My hope is that the message spreads far and wide, proving the ability the sports community has to help drive awareness in sustainability.

I firmly believe that if we, as athletes, can demonstrate sustainable behaviors, our fans will follow. They’ll see how easy and impactful it is to just change a few of their everyday habits, and together, we can create real change in the world.

I know when I’m competing on the pitch that there are girls in the audience who are studying what I do, hoping to improve their soccer game. If my behaviour on the field can inspire them, I don’t see why my behaviour off the field can’t as well.

Climate change is one of, if not the most critical issues facing our world today. But the size of the problem is no reason to despair. Systematic change starts with personal behaviour, and as a professional athlete, it’s my responsibility to spread awareness. I want people to know that they can, in fact, change the world. They just have to start with themselves.