Could mobilising football fans be a key climate action strategy? 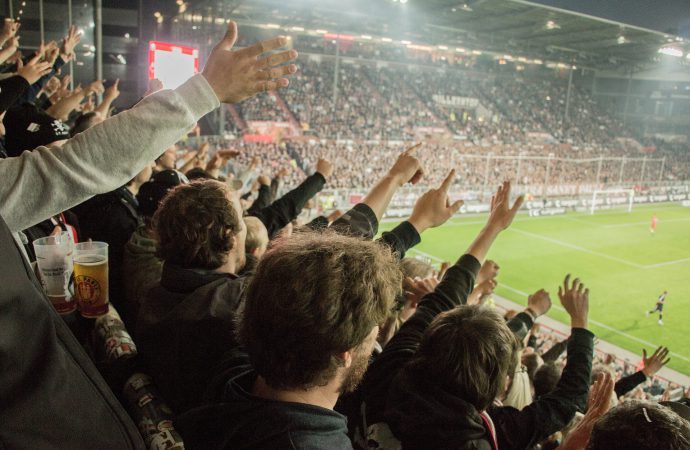 Is engaging football fans the key to tackling climate change?

“No,” you’re probably thinking, “the key to tackling climate change is the quick and substantial reduction of greenhouse gas emissions, and the transition away from a way of life that includes unnecessary consumption and the burning of fossil fuels.”

But, it’s fair to say that, with the right information, motivation and support, the 3.5 billion people across the globe that follow football have the potential to significantly influence that reduction, as well as the speed of the low-carbon transition.

That’s what Katie Cross was betting on when, in 2019, she launched Pledgeball – a movement aiming to encourage millions of football fans to make small (or large) changes to their lifestyles to collectively tackle climate change.

Cross’ rationale was clear: the collective nature of playing football and supporting a team could be channelled into doing something to positively impact the environment.

She was inspired by the “overwhelmingly positive response” she received after discussing sustainable lifestyle choices with her Bristol-based football team, The Misfits WFC, and decided to host an inaugural tournament for which the only cost of entry was one or a number of sustainable lifestyle pledges.

From there, Pledgeball was born; but Cross wanted to validate her assumptions about the influence football fans could have in terms of climate action, so turned to University of Brighton professor Mark Doidge – who specialises in European football fan cultures – who asked his research intern, Jennifer Amann, to take on the project.

Amann, who had previously investigated the corporate social responsibility strategies of German Bundesliga clubs, wanted to find out why some issues appeared to move football fans, while climate change seemed to be on the periphery of the conversation.

“Fans have mobilised around racism, homophobia and sexism, but climate change hasn’t really made its way into the stadium,” Amann tells The Sustainability Report. “Racism and sexism affect players and feels tangible somehow, but climate change doesn’t seem to be present on the pitch. Extreme heat, flooding or air pollution is often viewed as something different.”

Cognitive dissonance and apathy is the common response to climate issues, says Cross, because news about it is often scarey or overwhelming. It’s portrayed as a macro issue with local consequences less commonly demonstrated.

Using a study by Bamberg and Rees (‘Collective climate action: Determinants of participation intention in community-based pro-environmental initiatives’) as a guide, Amann set out to answer two research questions: 1. What characteristics of the football fan community does Pledgeball seek to leverage to mobilise climate action?; and 2. How have Whitehawk supporters experienced their engagement with Pledgeball?

The first element of the research was sending out an annual club survey, which mixed general questions about the club with questions about the environment. Secondly, during the Covid-19 pandemic lockdown, Whitehawk FC started a Virtual Pledgeball Lockdown League against other clubs, such as Eastleigh FC and Peckham Town FC, with the teams competing based on the amount of carbon emissions they pledge to save over the course of a year.

Finally, Amann conducted in-depth interviews with a handful of the 65 fans who responded to the first survey, focusing on their opinions around the club’s responsibility towards climate action and other environmental issues.

The three parts of the study uncovered some interesting findings. Firstly, supporters who identified both as ‘environmental newcomers’ and ‘environmental experts’ believed that making pledges in support of their football team on a regular basis was a “new and motivating way” to engage with the topic of climate change. Offering a voluntary commitment that is not monitored by Pledgeball or anyone else once the pledge is made was also looked upon favourably.

Indeed, the second part of the research question, ‘How have Whitehawk supporters experienced their engagement with Pledgeball?’, Amann discovered that both ‘newcomers’ and ‘experts’ found that the voluntary nature of Pledgeball, and the ease of being able to choose from a list of behaviours showcased on the website, made it more seamless for fans to get involved once their “interest was sparked”.

“Being able to choose what type of behaviour you want to change is about drawing on people’s agency in a way that they feel they’re not being forced by someone external,” Amann explains.

Cross adds: “Individual behaviour change can’t be quantified. People may send you a picture of what they’re doing to verify it, but that doesn’t determine whether they’re doing it every day. What we want is a whole changing mindset and attitude – not just looking at individual behaviour, but making them aware of their impact in every aspect of their lives.”

Fans taking part in the study became “more aware of their responsibility and agency”, and felt that they had started to reevaluate the world around them, including nature and relationships with people.

During the Virtual Pledgeball Lockdown League, Amann and Cross noticed that fans were getting “quite upset” if they lost a match, bringing the competitive element of football fandom into the mix. According to Amann, the league “changed the climate discourse” with fans not focusing on what they were losing and sacrificing by making changes, but how they were improving their lives and helping the team they support win.

To analyse fan attitudes and actions, Amann used a model that provides indicators for participation in climate action. Emotion, one of the main indicators, is obviously a big part of football. Whitehawk fans felt a sense of achievement when they won the league, Amann says, adding that those who didn’t carry out their pledges consistently felt guilt for letting their team down.

The “high level of identification” that fans have with their team can be a powerful characteristic when it comes to the collective fight against climate change. The emotional attachment they have with their favourite team and fellow fans is regarded by Amann as “an interesting leverage point for environmental campaigns” like Pledgeball.

Other characteristics commonly found in football supporters that could aid collective action towards climate change include a sense of community, social norms, collective efficacy beliefs and group-based emotions.

“Football fans are interesting for many reasons,” says Amann. “Rarely ever do you get a collective of so many people from so many different backgrounds coming together for the same thing. It doesn’t seem to matter whether you speak the same language, share the same religion, what political party you vote for.

“So when the aim is to tackle climate change by mobilising a huge amount of people in a short period of time, not only do you have huge numbers of football fans, you also have this very diverse set of people.”

“I think we can tell a different story through football in a way that encourages people to start reevaluating their relationship with nature. We focus so much on the negative outcomes of climate change, but somehow the stories about what is actually possible are not necessarily told. Maybe that’s one story that could be told through football.”