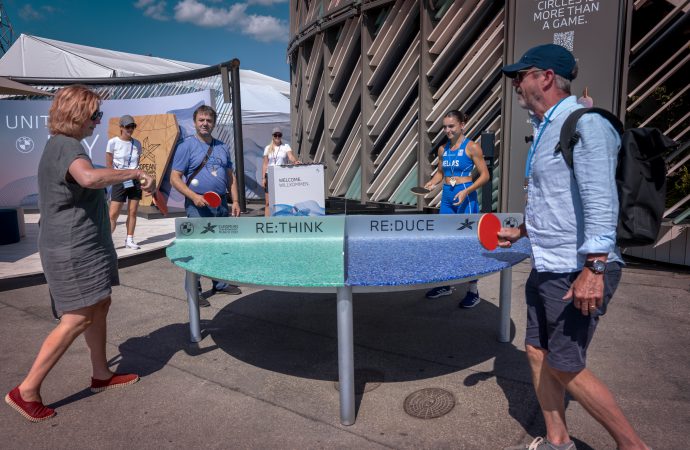 Guided by Helen Gampper, The Sustainability Report goes behind the scenes to explore the environmental highlights at this year’s European Championships

On 21 August, a highly successful second edition of the multi-sport European Championships climaxed in Munich, as the German women’s 4x100m won the last of 172 gold medals awarded in nine sports across the 11 days of competition.

The brainchild of sports marketeer Paul Bristow, who also played a key role in the early development of the UEFA Champions League, the event aims to bring together the European Championships of multiple sports into one city every four years to maximise broadcast coverage and exposure. The first edition took place in Glasgow in 2018 with a slightly different line-up of sports, which this time was made up of athletics, beach volleyball, canoe sprint, cycling (multiple disciplines), artistic gymnastics, rowing, sport climbing, table tennis and triathlon.

No new venues were constructed for the event, only temporary stands and cycling tracks to be easily dismantled and repurposed, as Olympiapark München welcomed its biggest sporting event since the 1972 Olympic Games on its 50-year anniversary.

That event is remembered most vividly for the shocking terrorist attack that claimed the lives of 11 members of the Israeli Olympic team and a German policeman, and organisers of the European Championships have been treading a narrow line this year between remembrance of those victims and celebration of the forward-thinking architectural achievements of 1972.

The Olympiapark has become an intrinsic part of city and community life in Munich as one of the Olympics’ most successful legacy stories, and the iconic Olympiastadion (athletics) and Olympiahalle (gymnastics) formed the heartbeat of the European Championships, with the free-to-watch triathlon and mountain bike races also taking place in the park. In the west of the city the Rudi-Sedlmayer-Halle hosted table tennis having staged basketball in 1972, while the Regattastrecke Oberschleißheim in greater Munich once again hosted the rowing and canoe events.

“It was that rich history and its sustainable foundation, with no construction of new facilities, that first attracted me to the project,” says Munich 2022’s sustainability manager Helen Gampper.

Led by Gampper and event manager Lena Bernheine and supported by external consultants, Munich 2022 published a sustainability strategy called ‘Count & Last’ on the one-year-to-go milestone, which outlined how organisers intended to contribute to the ecological, social and economic sustainability of the event.

The strategy was built on two pillars. The first was a series of internal measures embedded into the organisation of the event, structured around six focus topics:

The second pillar consisted of external measures, which were 12 sustainability-themed challenges – one for each month in the lead-up to the event – that people of all ages could participate in. Gampper’s sustainability team tried to think outside the box to promote innovation throughout this event series, in the hope that some of the initiatives might inspire future event organisers in Germany and beyond.

For example, a donation appeal from the organisers saw them collect more than 24,000 LEGO® bricks from members of the public, who were then invited to a community day to help build six ramps for wheelchair users. The brightly coloured ramps were put on display in venues at the Olympiapark and the Königsplatz, which hosted sport climbing and beach volleyball, to raise awareness of the importance of inclusion and barrier-free access among spectators during the event.

One of the other pre-Munich 2022 events, entitled ‘From Routes to Roots’, asked locals to log kilometres that they ran, swam, or cycled on Strava, which were then converted into more than 1,000 trees planted for a regional reforestation project. Athletes were engaged for this project and others too, with Munich 2022 ambassador and 800m runner Christina Hering turning up to a tree-planting day.

The initiative was delivered in partnership with ClimatePartner, a German organisation which develops solutions for carbon-neutral companies and products, and who assisted Munich 2022’s sustainability team with measuring and offsetting as they aimed to deliver a carbon neutral event.

This was partly achieved through a focus on transport. Munich has excellent cycling infrastructure and a significant proportion of spectators travelled to and from events by bike or e-scooter, with thousands of them spread across the Olympiapark. Many more used public transport, which was free to ticket-holders living within a 50km radius, as well as to delegations, volunteers, and media, thanks to a partnership with Munich’s transit authority MVV.

ClimatePartner also calculated the average CO2 footprint of visitors, with ticket buyers given the option of offsetting their own emissions by making a voluntary contribution of €1.40 to a climate protection project. Organisers have calculated that 1,270,000kg CO2e could be compensated by the climate protection contributions of the spectators alone.

“Sustainability is not just a word for us. We want to really live it,” said Schöne in an op-ed ahead of the championships, and her team worked closely with Gampper and Bernheine to deliver on the various initiatives, including a pre-event report that was released in November 2021.

“When the top leadership also wants to deliver a sustainable event, that really helps,” says Gampper. “It allowed us to focus on aspects where we could have a genuine impact.”

During the event, venues only stocked reusable cups and bottles available for a small deposit, with water dispensers dotted around the sites. Organisers were anticipating this would lead to a six-figure saving in PET bottles. Waste separation and recycling were also promoted through signage in line with previously declared federal targets to make the Bavarian capital a “zero-waste city”, and there were no printed programmes, with all event information available on a dedicated app.

Spectators were also engaged through workshops on topics like sustainable nutrition and upcycling, which were held on-site as part of the popular ‘Back to the Roofs’ cultural festival that took place alongside the competitions.

One of the most innovative and symbolic measures was the awarding of potted plants instead of pre-cut flowers to each medal winner, who were then encouraged to either plant it themselves in the Olympiapark’s new ‘Champions Garden’ or have a volunteer do so on their behalf. More than 1,000 flowers were planted at the lakeside plot, which will bloom and pay a lasting tribute to the 2022 European champions, while serving as well as a source of food for bees and butterflies. The images of athletes holding plants on the podiums were also a rare sight and a nod to the sustainability underpinning the event.

On a similar note, a partnership with the International Fair Play Committee led to an award with a “green” twist going to Andorran runner Nahuel Carabaña, who sacrificed his race to help Denmark’s Axel Vang Christensen in the men’s 3,000m steeplechase heat after the latter fell and injured himself. Carabaña was invited to help plant a new tree in the Olympiapark to commemorate his act of sportsmanship, while he also received $2,022 to donate to a charity in Andorra.

Most importantly, the learnings gained and challenges faced by organisers – Gampper mentioned sourcing disposable signage and branding materials, and persuading stakeholders to implement more sustainable processes as two of the major ones – will not be lost now that the event is over.

Two members of Paris 2024’s sustainability team were seconded to Munich 2022 for the event and will take useful observations back to their Organising Committee, while the sustainability team also presented to potential future hosts who came to Munich as part of an observer programme. On the fringes of the event, European Athletics and Munich 2022’s domestic partner Allianz also organised a forum for young leaders representing each of the sports at the Championships, where they discussed how to solve some of the sustainability-related issues affecting their sports.

Gampper and Bernheine’s team will now continue to work with ClimatePartner on a post-event sustainability report containing the final numbers and recommendations for future event organisers in Germany and elsewhere, to be published at the end of the year.

They hope that by demonstrating that a multi-sports event welcoming over one million visitors can be held sustainably, the German people will become warmer to the idea of hosting mega sporting events like the Olympic Games in the future – with recent bids failing long before the IOC’s final decision due to public referendums.

A trend in this direction would also support the government’s national strategy for sporting events, which aims to convince a previously sceptical public that they’re worth paying for. Munich 2022 will have done no harm to this ambition – and might just have laid some strong foundations for a sustainable new approach to sports event hosting.