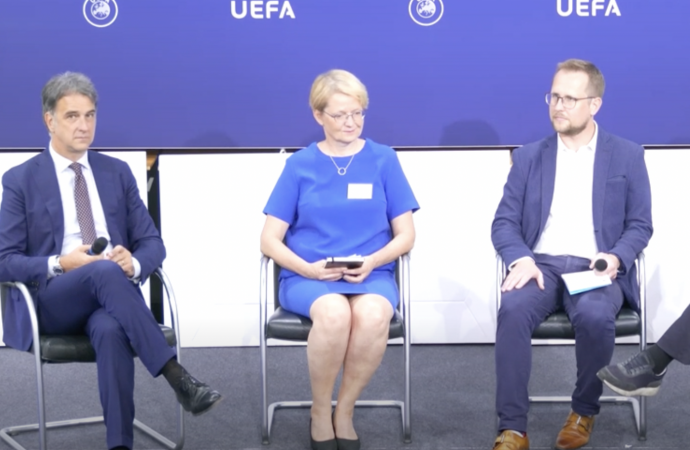 To mark Zero Waste Week, during the first full week of September, UEFA launched its Circular Economy Guidelines to introduce the 4R framework (reducing, reusing, recycling and recovering) to the football world.

The objective is to “minimise the impact” of football on the environment and “drive resource efficiency and cost savings”.

Moving towards a circular economy, defined by the Ellen MacArthur Foundation through three principles – eliminating waste and pollution, keeping products and materials in use and regenerating natural systems – is one of 11 key policies outlined in UEFA’s 2030 sustainability strategy, Strength Through Unity. European football’s governing body has the ambition to embed the 4R principle in all its operations by 2030.

Michele Uva, UEFA’s football and social responsibility director, said that the guidelines would provide a “concrete, easy, practical guide to inspire the action of every football stakeholder.” During a panel organised to unveil the guidelines he acknowledged that while circular economy is a “new concept in football”, providing support of this type to clubs and associations was an important step on the journey towards “zero plastic and food waste” within UEFA, across its events and throughout European football by the end of the decade.

An eight-step strategic approach to implementing the 4R framework is at the heart of the guidelines:

1. SELECT one or more individuals in your organisation to be accountable for the strategy

2. ANALYSE your specific context and identify key issues in your organisation, facilities and events

Some intermediary 4R targets along the way to 2030 include:

The document explores each of UEFA’s four circular economy focus areas, the first being food and beverages. PepsiCo, UEFA‘s Champions League partner for the 2021/22 through 2023/24 seasons, implemented circular economy practices at the 2022 Champions League final, testing policies that are now in the guidelines and are already being used by UEFA in collaboration with the German government and DFB to prepare for EURO 2024.

Katharina Stenholm, PepsiCo Europe senior vice-president and chief sustainability officer, said that the company aims for the first zero waste to landfill UEFA final by 2024, with the next target being zero plastic waste to landfill in the food and beverage sector at Champions League finals by 2026.

UEFA has compiled a list of the most meaningful actions to address food and beverage waste management at football facilities, obtaining data from the Life Tackle EU-funded project, surveys of 15 clubs participating in the 2021/22 UEFA Champions League, individual interviews with five clubs, a consultation group of 10 clubs and the pilot implementation of practices in select football facilities.

Some detail has been included in the document about UEFA’s three other circular economy focus areas of apparel and football equipment, energy and water and event materials, with more information expected in 2023. UEFA acknowledged that items in all three of these areas are often designed for single use, so they are targeting no landfill and an increase in product lifespans by following the 4R framework.

The guidelines’ appendices include common benefits and challenges, technical warnings, and best practices on ‘very high priority activities’ to achieve UEFA’s circular economy goals, such as guaranteeing an effective waste management supply chain. Numerous case studies are also covered in the appendices, such as Manchester City’s caterers F3 reducing waste levels by 80% via redesigned menus and raising waste awareness among guests and employees.

Anders Kjaer, the Danish Football Association’s football social responsibility manager, talked during the launch panel about how his organisation has developed an expert committee, with members ranging from university students to organisers of music festivals, emphasising the shared responsibility to conceptualise the right solutions by working together.

“It’s about vision and courage, but I’m not sure it’s a dream,” added Charlie Marshall, chief executive of the European Club Association. “Football has an absolute unique position in this space where it can transform itself as an industry, but in doing so it can have an enormous, outsized impact on the rest of society because it has the platform it has.

“If we can have millions of people doing something small in the right direction, that is more than a few people getting it all exactly right. And that is what football can do and that’s what clubs need to remember.”

“Humans cannot be perfect when it comes to the climate issue, but that doesn’t prevent us from doing something, taking small actions and encouraging others to do the same,” she said.