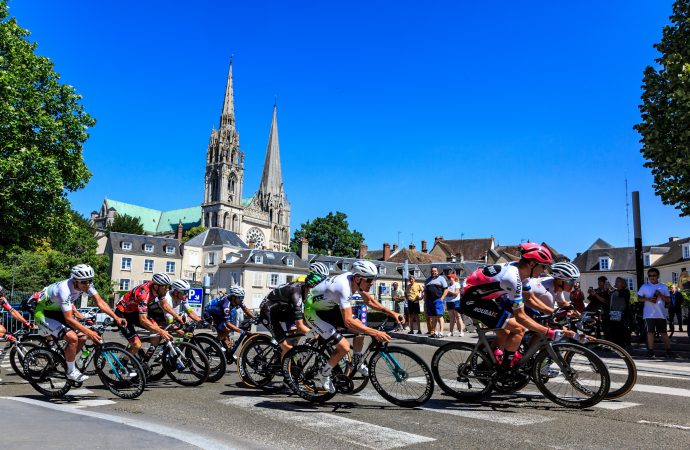 As temperatures on 24 July reached 30°C, 5°C warmer than the Parisian July average, the 109th edition of the Tour de France concluded on Champs-Elysees.

On stage nine, TotalEnergies rider Alexis Vuillermoz collapsed at the finish line after vomiting through a day that surpassed 40°C. He was taken to hospital and diagnosed with a skin infection that required surgery.

“One of the worst days on the bike of my life,” he said after withdrawing from the race. “Exhausted from the first few miles, impossible to swallow anything. And 200km like that is long, very long.”

Heatwaves in France have increased three-to-four times faster than other northern mid-latitudes over the last 40 years. As part of the July wildfires that scorched thousands of hectares, requiring 36,000 people to be evacuated from their homes, a 25 square mile-sized blaze burned in Landiras, a commune in Southern France that the Tour passed through in 2021. This year’s route only steered the peloton clear of the area by chance.

Romain Bardet, riding in his 10th Tour, claimed he’d never experienced heat like it at the race. Four days later, he was “roasted” on the bike when falling behind on an important stage. The road temperature reached up to 20°C warmer than the air temperature, meaning thousands of litres of water were required to cool the road at ‘critical melting points’.

Andre Bancala, the person heading route logistics and safety at the Tour, said “you have to do it at just the right moment, about 15 minutes before the peloton gets there. If you do it too early, it just heats up again,” emphasising the inefficiency of such a reactionary action.

“It will be the same for everyone,” remarked Tadej Pogacar. “I don’t think anyone likes to race for five hours in 40-degree [heat],” but he also admitted that “I don’t even think it’s healthy for us.”

Evidence supports his claim. A 2019 study found a 9% decrease in the time-to-exhaustion for elite cyclists when a heat pad that didn’t raise core temperature was attached to their backs. A study from 2000 examining the effects of heat stress on exercise performance in elite road cyclists found that power output was 6.5% lower and blood lactate was significantly higher when athletes performed in 32°C compared to 23°C.

Julen Ucin, Euskatel-Euskadi team doctor at the 2021 Vuelta a Espana, the Spanish equivalent of the Tour de France, said “you only have to be as little as three or five per cent dehydrated for your physical performance to be affected.” Moreover, it’s difficult for cyclists to hydrate and cool down if the bottles become hot within 30 minutes of receiving them from soigneurs.

If riders can’t perform to the best of their abilities at the biggest race in the sport, it becomes less of a spectacle. Consequently, the Union Cycliste Internationale (UCI), cycling’s governing body, enacted the Extreme Weather Protocol before stage 15 of this year’s Tour.

Introduced in 2016, the protocol requires that when met with extreme conditions, the race’s organisers, chief medical officer and representatives of teams and riders hold a meeting to determine a course of action. For stage 15, they extended the interval where riders were permitted to take on water from the beginning of the stage until 10km from the finish, but given the searing heat confronting riders, this was a relatively minor measure derived from subjectivity.

Rather than organisers shortening or cancelling stages, the only disruption at this year’s race were Derniere Renovation climate protesters blocking the road on two different stages, declaring “the world toward which politicians are sending us is a world in which the Tour de France will no longer exist.” They will continue taking similar actions until there is credible and effective commitment from the French government to improve building insulation.

“We’re going to have to change the way the Tour de France is designed in the next few years,” added climate change expert Matthieu Sorel. Ice vests and baths can’t be relied upon to provide riders with absolute heat relief.”

There are varying opinions on how drastic a redesign should be, but shortening unnecessarily long flat stages is a feasible option. “It is clear that some races, particularly stage races, may sometimes lack appeal, which can lead to disenchantment among the public and television viewers,” the UCI acknowledges, mentioning “innovative race formats” as a possible solution.

Another idea, as suggested by Lisa Leon, a scientist at the US Department of Defense studying heat stroke, is starting stages early in the morning when temperatures are cooler and sunlight isn’t as powerful. This is mainly an issue at the Vuelta, where stages often don’t start until the hottest part of the day in the afternoon.

Time of year is also an issue. The Tour de France is traditionally scheduled in July, where afternoons are profitable because they coincide with school summer holidays and increased TV viewership in Europe and North America.

According to Yuri Hosokawa, professor at Waseda University and member of the International Olympic Committee’s Adverse Weather Impact Expert Working Group for Tokyo 2020, “organisations and communities tend to have a fixed mindset that certain sports must take place in a certain time of the year.” If spectators complain that it’s too hot to stand at the side of the road however, as many did in July, this could easily change. In fact, the UCI plans on “adapting the event calendar in order to avoid the hottest times of the year.”

The 33 World Tour races on the men’s calendar in 2022 account for 159 days of racing, while the women’s season covers 72 days of racing across 27 events. Because the three Grand Tours (the Giro d’Italia in addition to the Tour and Vuelta) are the only races spanning three consecutive weeks, they might be better suited to the spring or autumn when heat isn’t as oppressive. Shorter races ranging from one day to a week can then assume summer slots.

It should be noted that risk of heat-related collapse is greatest when “high-environmental temperatures occur early in the competitive season when participants may be inadequately prepared and have not yet acquired natural acclimatisation to heat.” This will become a greater threat when springs arrive earlier and warmer.

At the 191st Congress of the UCI, held last week in Wollongong, Australia in parallel to the 2022 Road World Championships, a Climate Action Charter for cycling stakeholders was announced. By signing this charter, organisations involved in professional cycling pledge to respect eight principles in line with the UCI’s commitment to becoming carbon neutral by 2030.

Signing up to the charter isn’t mandatory, but the UCI is considering “imposing certain regulatory requirements on organisers and teams in order to make our actions more effective.”

Also presented in Wollongong was Agenda 2030, approved by the UCI Management Committee last June after signing the UN Sports for Climate Action Framework in 2020. The document constitutes the UCI’s roadmap for the next eight years, but its primary aims are making the sport “more inclusive and developing a lifestyle around cycling.”

The UCI expresses its intention to develop a ‘climate change adaptation strategy’ with measures including:

The Extreme Weather Protocol’s ‘absolute priority’ is the safety of riders, so the climate change adaptation strategy needs more emphasis on inclement weather that is forecast before races, not only during them, to prevent stakeholders from improvising and becoming amateur meteorologists. Yuri Hosokawa remarked that “we must continue to do a better job not only identifying the risk or reasons to cancel certain events but also proposing alternative options with data.”

A data-based approach to activating the Extreme Weather Protocol, such as using wet-bulb globe temperature – a refined version of the heat index – might offer a path forward. It considers the temperature, but also the humidity, wind speed, sun angle and solar radiation levels (heat index only includes temperature and humidity while assuming you’ll be in the shade). The wet-bulb globe temperature gives a more accurate sense of how hot the weather feels, not just how warm the air is, meaning it more closely resembles how hot cyclists feel while riding.

Data from innovations like the CORE Body Temperature Monitoring Sensor, a compact device clipping onto a rider’s heart rate monitor that provides data with medical-grade accuracy, can help prevent messaging that ‘mythologises suffering’ when riders are likely to suffer by pushing through stifling conditions.

“Other sports would be cancelled if it’s that warm,” said Bob Jungels on a 40°C day at this year’s Tour, “but I think mostly in cycling we learn if something bad happens, which is very unfortunate.”

Temperatures at this year’s Vuelta weren’t quite as scorching as the 43°C reached in 2021, where teams used 35 bidons and 75 kilograms of ice for each rider every day, but still almost surpassed 40°C. 2020 Giro winner Tao Geoghegan Hart described the humidity as ‘like a jungle’.

“It’s not particularly hot, but it’s very humid,” he said. “In the end, the effect is similar, but also different because you sweat a lot more. Every day in the last week has been soaking wet. You can’t see it on TV or hear it in a podcast, but we were dripping really crazy.”

“I hate this heat, it’s ridiculous,” three-time world champion Peter Sagan complained at the race in 2021. “The UCI should implement some form of regulation so we do not have to race like this.”

A year on, the UCI has presented the Climate Action Charter as the “first steps in our sport’s [sustainability] journey” – steps that need to be followed up quickly to safeguard the future of the sport and the athletes that make it so special.